DETROIT—After receiving mixed feedback at the release of the new CT5-V and CT4-V, Cadillac has announced a new ad campaign aimed at receiving pity from prospective buyers and enthusiasts. We arrived in Detroit Monday morning to get a briefing from a Cadillac spokesperson about the new initiative.

When we arrived we were seated at a desk in one of their engineering offices, with a seemingly nervous host.

The man slouched over his desk and looked around, making sure nobody could hear.

“We didn’t really want to… you know… use these engines for those cars.”

He looked around again, and reached behind him for a plastic cup which he filled with water from a cooler. He drank greedily and threw the cup into the garbage. A bead of sweat rolled down his forehead.

“We really wanted to just release them with the bla-”

“Hey, Noah! How are these guys treating you?”

GM’s CEO Mary Barra appeared in the doorway, carrying a 2×4 with a nail stuck in the end.

She raised the battered 2×4 in her right hand as she leaned on the doorway.

“Just found this laying on the ground on the factory floor. Really dangerous, right?”

The man swallowed before he responded.

Mary nodded at him without speaking, as if he just stated something obvious.

“Yeah, Noah. Would be a real shame if somebody got hurt with this. Especially now that we’re under all of this push-back from the Automotive media. You know, one little trip or mistake and this thing could just get lodged in your appendix or something! Hahaha!”

The man swallowed again without responding.

“Alright! Good luck with these fellas, Don’t let them scare you, Noah!”

Mary then left the doorway as our host wiped the sweat from his brow. 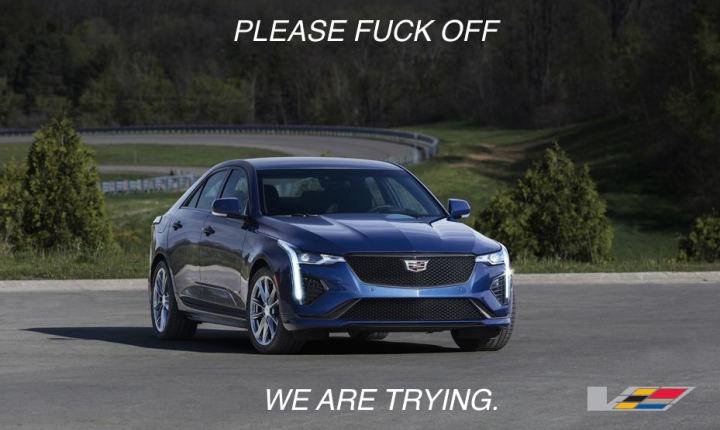 In the background through the doorway we could see Mary Barra now directing a dog around on a leash.

She walked up to a seated engineer, “Hey, Tom! This is your dog, right?”

The engineer looked back wide-eyed as Mary handed him the leash.

“Just found him wandering around outside! What’s this little guy’s name?”

“You gotta be more careful with Terry, Tom! More careful in general! Would be a real shame if Terry got hit by a car because you weren’t careful enough! Right?”

The man looked at her, holding his dog.

Mary looked at the man with wide eyes, pausing.

Mary strode out of the room as all of the engineers look at each other nervously.

Our host Noah quickly went over to his computer and got on a job board. He began to type quickly and nervously, his hands shaking as he typed.